SOCCOM stands for Southern Ocean Carbon and Climate Observations and Modeling, so it makes sense that most of the seven floats deployed for the program on this cruise were towards the southern end. Two, however, were dropped off in the Agulhas Current just below South Africa. The Agulhas comes down along the east coast of Africa and forms the western boundary of the Indian Ocean. It was obvious from sea surface temperatures and lots of our other measurements onboard that we had crossed into a different water mass. 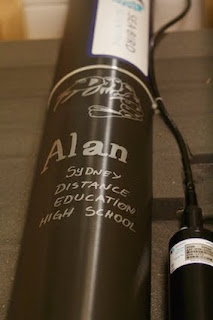 At the first of these relatively northern stations, float #0888 was launched. It was adopted by Sydney Distance Education High School in Australia and given the name 'Alan.' Here's the explanation for the name, and some neat science trivia!
"This is the name of the world's oldest ever krill, who was kept for a total of nine years by the leading (krill) scientist Tom Ikeda from the Australian Antarctic Division before he (Alan) somehow escaped during a cleaning of his tank and slipped down a nearby drain. Being an adult when he was captured, Alan was probably at least eleven years old at the end, making him more than five times older than any krill previously recorded."

The deployment took place in the evening. As usual, we launched the float after the CTD water samples were back onboard, just as the ship was pulling away from station to head to the next one. Within a day, Alan the float had already reported back with its first profile and the sensors are providing good data. Every ten days, the team on shore should receive another transmission of data from Alan's most recent trip to 2,000 meters deep (and back).

Within minutes of the float's deployment, the box it had been stored in was repurposed. The stack of crates in the main lab has been a gathering place all cruise, with many card games, guitar sing-alongs, and naps taking place on them. This instance was a bit different, as I came upon SIO grad student and CTD watch-stander Mike actually inside the box, wedged in the foam that had recently held the SOCCOM float in place.

Napping spots are at a premium onboard any research cruise and within the first few days of this trip, it was clear that the float boxes would be prime real estate. Generally scientists share a room with someone on the opposite work shift, so each stays out of the room for 12 hours of the day. But any combination of down-time, seasickness medication, or not getting enough sleep can lead to a need to nap. It's bad form to sleep in the lounge or other spaces shared with the crew, so the float boxes in the main lab became the place to be. Usually just a few people at a time, but some point eight scientists snuggled together. 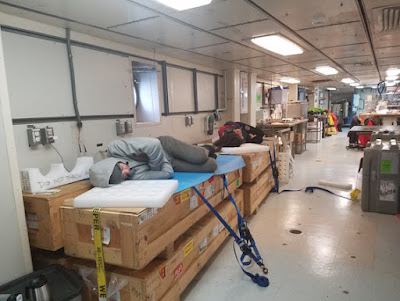 Napping time for Wiley and Giuliana..

Now that all the floats have been deployed and we're heading back to port, the crates have been relocated to the back deck, where they continue to attract a crowd. The naps have continued out in the warm weather, and they're the perfect place to stargaze from at night.

SOCCOM stands for Southern Ocean Carbon and Climate Observations and Modeling, so it makes sense that most of the seven floats deployed ...

As part of the US GO-SHIP Program, we will repeat the I06S cruise line, targeting the rough waters of the south Indian Ocean, on board of the R/V TG Thompson! We will depart from Cape Town, transiting down to the Antarctic shelf at 30E. From there, we will start the approximately 93 CTD stations towards South Africa. We will sample the water column from the surface to the bottom of the ocean, for physical, biological and chemical properties. A series of drifters, gliders, Argo floats and biogeochemical Argo floats will be deployed along the way! So, stay tuned and follow our journey!